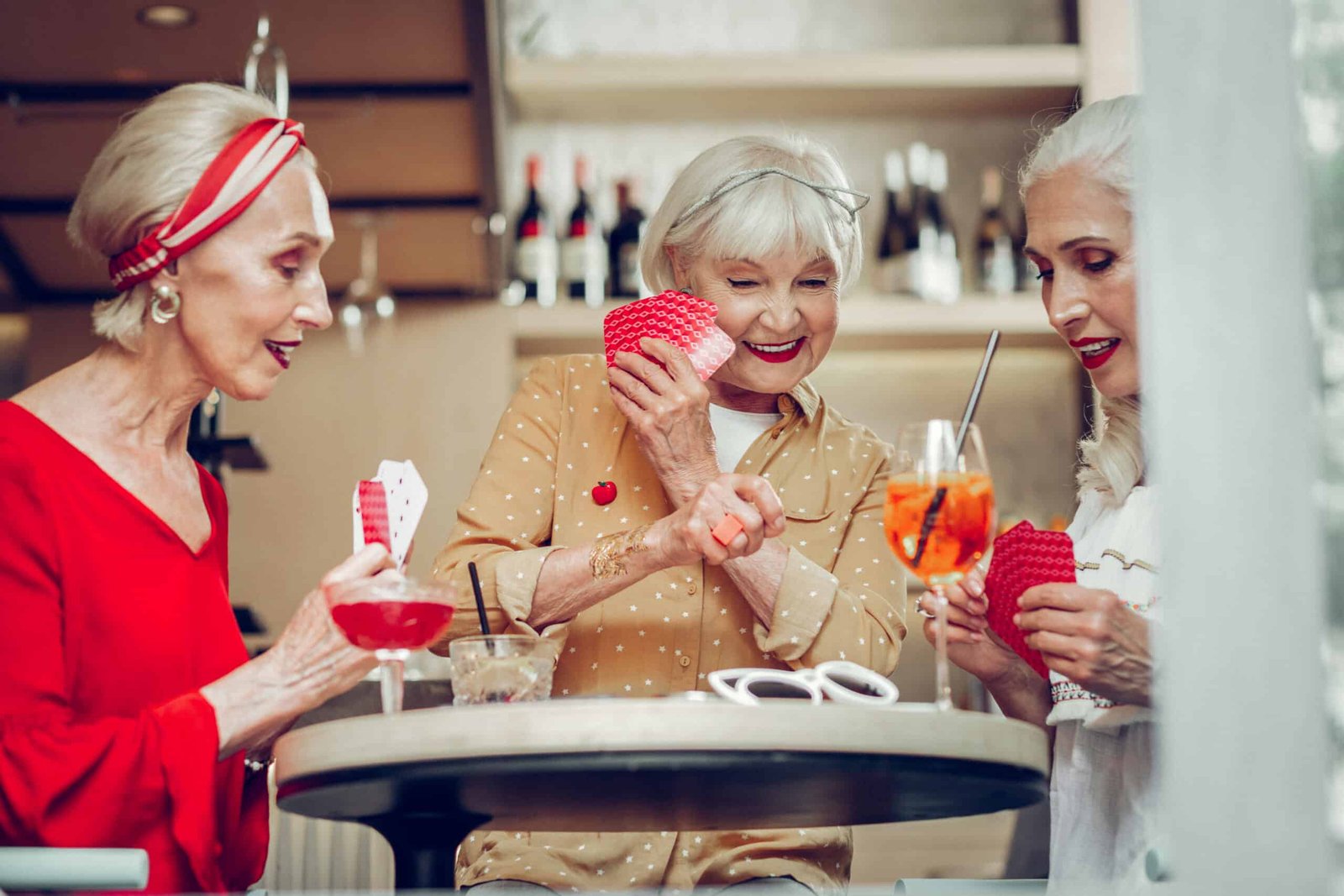 While getting outside is great for seniors’ health, sometimes the weather doesn’t permit it. Whether it’s storming buckets or just too hot or too cold, it’s a good idea to have some indoor games lined up in case you can’t go outside that day. And the best thing is that you don’t even have to change out of your nightgowns for women to play these indoor games! (Although you may feel a little more ready if you switch into some women’s elastic waist pants before playing a serious game of Settlers of Catan.)

Here are 11 categories of indoor games for seniors to inspire you to try something new for your next game night:

Board games are the quintessential indoor game, and there are literally thousands of board games and expansions to choose from. No matter how many players you have or how long you want to play or what kind of game you’re in the mood for, there is a board game out there for you. Some popular ones include Clue, chess, checkers, Connect Four, Candy Land, Backgammon, Battleship, The Game of Life and more. When it comes to your board game collection, you’re only limited by your budget and your storage space.

Almost all strategy games are technically board games, but we wanted to call them out separately because of their longer playing times and more complicated rules. Not everyone loves spending multiple hours playing Monopoly, Risk or Settlers of Catan, but if you love complex endeavors, these strategy games are a great way to pass an afternoon (or even a whole day, depending how many rules you add on). For longer strategy games, make sure that you’re taking a break every 60 minutes or so to get up, hydrate, snack, use the bathroom and get your blood flowing.

Tile games ditch the board altogether in favor of using tile pieces. Dominoes is probably the most famous tile game in the United States, but there are others such as Mahjong and Rummikub as well. Most of these games offer several variations that you can play to shake things up, though they sometimes require additional equipment in addition to the tiles. For instance, Mexican train dominoes require a plastic hub piece and two different kinds of markers.

Dice games are another fun spin on indoor games for seniors. There are many dice games to choose from, such as Yahtzee, Bunco, Liar’s Dice and Farkle. Some of these can be played with just a basic set of dice, while others require additional equipment. For example, Yahtzee requires a cup, scoring sheets and pencils.

If you’re a vocabulary whiz or a dedicated reader, then you will probably enjoy playing word games like Scrabble, Boggle and Bananagrams. Not only are these games entertaining, they will also help to keep your brain sharp during your golden years. If you’re by yourself, you can do solo word games, such as word searches and crossword puzzles. Look for large print books if your eyesight could use a little help.

More of a numbers whiz than a walking dictionary? In that case, you might find numbers games more enjoyable than word games. Sudoku is the most well-known numbers game but there are others out there such as Kakuro as well.

Many older adults have extensive knowledge about at least one niche subject, and trivia games are an awesome way to show off this knowledge while socializing with teammates. You can create your own list of trivia questions from scratch or borrow them from the internet — or you can get an official game such as Trivial Pursuit. To keep things interesting, we recommend choosing a different theme for each trivia game so that everyone gets a chance to show off their knowledge.

If you’re technologically inclined, online or app-based games are an excellent way to pass the time and they don’t take up precious closet space that you need to devote to your adaptive clothes for women. They can be streamed online or downloaded to your devices so that you can play even without an internet connection. If you want to get started playing online games, we recommend choosing a game that you are already familiar with playing in real life, such as chess or Monopoly, to get used to playing on your device. Then, you can branch out into new games once you’re used to gaming on your phone, tablet or computer.

If you really want to level up your digital gaming, then consider getting into video games. Video games do require more of an upfront investment than online gaming because you have to buy the various consoles plus the games themselves, but many seniors find it worthwhile. Video games usually offer solo and multiplayer modes so you can play by yourself or with someone else, depending on your mood.

Most games are designed to be played with other people, but there are definitely some that you can play by yourself, including many that we listed here. Solitaire, Sudoku and crossword puzzles are all perfect for solo players. Many online and video games are designed for solo players as well, so if you don’t have anyone to play with, you can still keep yourself entertained that day.

What are your favorite games to play — either in a group or by yourself? Drop them in the comments below so we can keep adding to the list!

Subliminals: What Is It? How Do They Work?

Ashwagandha: Definition, Health Benefits, Side Effects And Many More